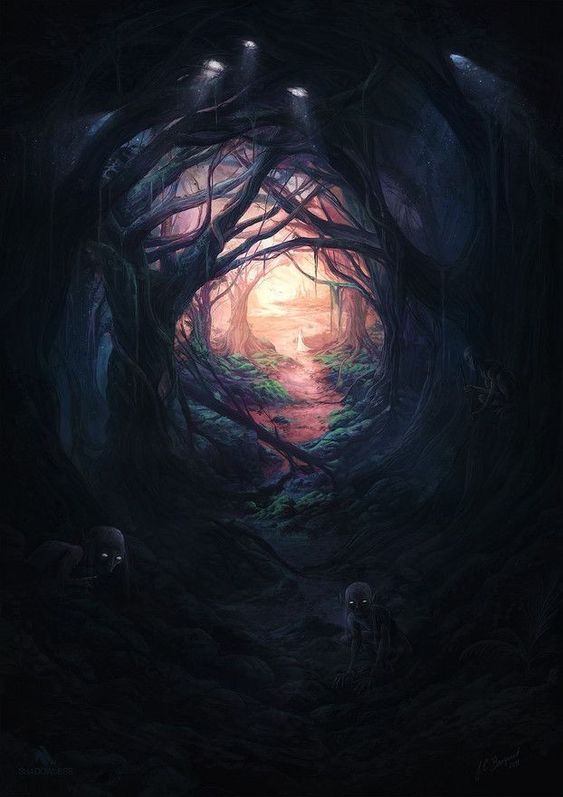 It was a warm day. Summer was approaching and even in the deep forest the sunlight managed to break through the canopy. Hazel was working around her cottage. She put some of the wild berries she had gathered yesterday with a leftover sugar on the stove to make some jam for winter. It would be a small jar but berry jam was a treat in the winter months. That was when it hit her.There was something nagging at her the whole morning, a strange itch at the back of her head, a hum of sorts. It was in fact laughter! A laughter that was getting louder and louder now. She froze and rushed out. They were already there, five lanky emaciated humans with strange growths of bark, bone and moss on their bodies, clothed with bloody and dirty furs. One of them naked. They were standing in front of Hazel’s protection stones, idly grinning, looking at her with a blood thirsty glint in their eyes. Some branches snapped behind her! Hazel turned, a few more were lurking there, like ghosts emerging from the forest in their monstrosity. Rays of sunlight were shining on the lush green mosses, yet the filth covering the Ravagers made them into silhouettes of shadow, giving them a strangely alien aura.

“What are you waiting for? You aren’t going to get in…” A crack! Her stones were cracking! Long lines were appearing on them, eroding her magic. No! She focused, pushing against the invading will. That was when the laughter fully erupted in her mind, deafening her. The ravagers joined, howling, laughing, banging on things, on each other. She pushed harder and the cracking stopped for the moment. Hazel felt tired, the few seconds of resistance cost her so much already. She remembered being stronger, but age has a price and she must have been paying it unbeknownst to her for years. She had felt her body fray, but she did not realize that her mind had weakened too. Focus! She told herself.

*we have time* a whisper in her mind said as the erosion began again. Hazel hurried into her hut.

“Where is it?” she murmured, “where did I put it?” Then she froze. The stones shattered, her mind filled with laughter again, cold omnipresent laughter. She finally found her satchel, the door burst open, the window shattered behind her. She turned then stumbled forward. The little stone she was clutching in her hand skipping beneath the floorboards. And her hope to survive the day with it. One of the ravagers grabbed her by the hair pulling her upwards. Howls and laughter. The forsaken laughter everywhere. Three of the creatures that once could have been called human broke into her hut. One that was not pulling her up clenched its hand into a fist and hit Hazel across the face. Her head smashing against the wall, something snapped, a splitting pain shot through the bridge of her eye and her vision blurred. She realized that she was afraid. Everything was screaming at her to run, but an old woman like her was not strong enough to break free. The only thing she managed was to hide a little bit of herself away, to part her body wracked with pain and her mind filled with laughter from her spirit. Someone kicked her in the gut. Then her chest. One of the Ravagers jumped up just so it could bring its unnaturally long limbs down on her. Every time she screamed, every time she yelped, they burst out howling. She smelled fresh air, they must have dragged her outside. Something cold and hard smashed into her face and she lost control of her jaw. The scream her body gave out must have been especially exhilarating since the howls rose to a new height. Hazel fought with herself. The little bit she stowed away was slipping from her, she was being consumed by dread. The pain kept coming, her bones kept breaking, she could barely breath and she was terrified that it would not stop. She gathered her strength and her willpower to do the only thing she could, wait for the end. Time passed. All of sudden she was touching the ground with her bare skin. Last remnants of her clothing, particularly her hand mended hem, was cutting into her flesh, refusing to tear. She felt rocks and grass on her skin. She tilted her head and it slipped over her chin. And thus she was stripped naked. They dragged her up and with ropes, made from her shredded clothes, tied her to a newly erected effigy, which had been built by those that did not participate in her torment in the meantime.

The laughter stopped for a moment, as if to marvel at the wanton destruction and horror he had caused, almost giving Hazel a gleeful look for resisting him all these years, a little rivalry he won.The laughter deafened her again. She sagged into her binds as the remaining ravagers trashed the rest of her home. One of them took the now partially burned berry jam, dipping its fingers into the pot and scooping out the still scalding mass into its mouth. Hazel refused to think of them as human at that point.

As quickly as they came, they also left, leaving her there, dying, alone, cold and in pain, for all the world to see. A totem for him, an offering. At least the sun offered some warmth. And then a squirrel hopped into what used to be her garden. It looked at Hazel curiously, then hopped away again. Before long, the squirrel returned with a bear. In her foggy state of mind Hazel flinched, expecting more pain. But then her rational part caught up with her. The squirrel climbed up and rested against Hazel’s cheek. The bear leaned against her legs and torso, gently, providing warmth to her shivering form. Song birds, owls, wild chickens and pheasants all emerged from the forest, singing their songs. And thus the laughter was drowned out. Children of the forest came to her in the last moment. Hazel was never a sentimental creature but now a wave of gratitude swept through her. Gratitude that she was not alone. She chose solitude in life, yes. Maybe it had indeed made her more bitter than she used to be, harsher,more malicious. There was also a sense of relief, her toil had not gone unnoticed after all.

She leaned against the squirrel on her shoulder, a bird landed on her head, sitting there comfortably. The song of the forest had pushed away the overbearing laughter, now she could rest. Even the pain of her broken body was somehow lessened now. “I am so tired,” she thought. Closing her eyes for the final time. It took a little bit longer before Hazel drew her last shallow breath and all that time, the animals stayed, even a little bit after. The sun started to go down and her body was getting cold, only then they started to move. The bear took her cottage as its sleeping spot, to watch over her body and the rest dispersed in an almost organized manner.